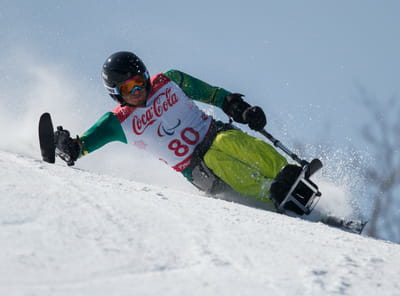 Emerging sit-skier Sam Tait became a paraplegic at 22, breaking his T11 vertebrae in a motorcycle accident in Wollongong, NSW. Airlifted to Royal North Shore Hospital in Sydney, he woke up three days later with no recollection of the accident and spent the following three months in intensive rehabilitation.

An experienced able-bodied skier, Sam was keen to get back onto the ski slopes after rehab. One month after he left rehab Sam travelled to Thredbo for his first lesson and soon fell in love with sit-skiing on the slopes of Perisher, where his parents own the Corroboree Ski Lodge.

Working towards qualification for the Beijing 2022 Paralympic Games, he joined the Australian Para-alpine skiing development squad.

Under the guidance of coach Chris McKnight, Sam debuted for Australia in Landgraaf, the Netherlands, in late 2016.

He had a standout performance at the 2017 IPC Alpine Skiing Europa Cup in Veysonnaz, Switzerland. He placed fourth in the men’s Super-G at this event, which saw him move within reach of selection for PyeongChang 2018.

We can pay for equipment if you have been severely injured in a motor accident or at work in NSW.