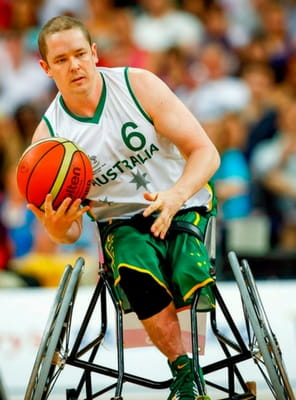 Brett Stibners, or “Sticky” to his friends is an Australian Wheelchair Basketballer.

At the age of 21 Brett was in a car accident as he was driving between jobs as an apprentice electrician and fell asleep at the wheel. The accident resulted in his leg being amputated above the knee.

Brett lists Brad Fittler as his most admired sportsman and enjoys snacking on potato chips and fishing in his spare time.

Brett shares his story in the hope others will learn from his story.

Listen to the audio description
Tagged in:

Tell a colleague about the Speakers Program

icare is available to help customers arrange alternative access to treatment and support during the NSW bushfire crisis.

Shine magazine is produced for participants of Lifetime Care and the Workers Care Program, it provides an opportunity to share stories about life after a severe motor accident or workplace injury.

Our commitment to you

Changing the way people think about insurance and care services for the businesses, people and communities we protect.

icare stands by to support customers impacted by bushfires

icare is here for their customers who have been impacted by the tragic events of the NSW bushfires.