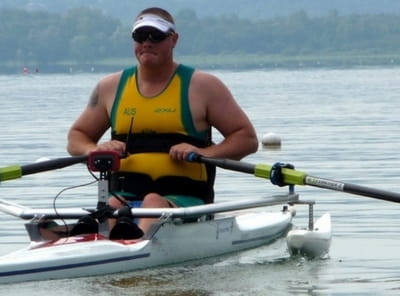 Ben Houlison is a champion adaptive rower and has represented Australia, winning bronze at the 2009 World Championships in Poland.

In 2004 Ben was working as a coal miner when he became paraplegic after a workplace accident.

Ben took up rowing a short time later and by 2006 became the New South Wales state champion shortly followed by Australian champion and then international success.

Ben has retired from the early mornings to focus on other pursuits including setting up his own business in cattle farming and wine growing. He now also has time to follow his beloved West Tigers.

Ben shares his story in the hope of teaching others about the impacts a work injury can have. “Once you experience a workplace accident, you never want someone to go through what my family had to”.

Listen to the audio description
Tagged in:

We can pay for equipment if you have been severely injured in a motor accident or at work in NSW.